Houses in Amsterdam: the most unique and Dutch places to live 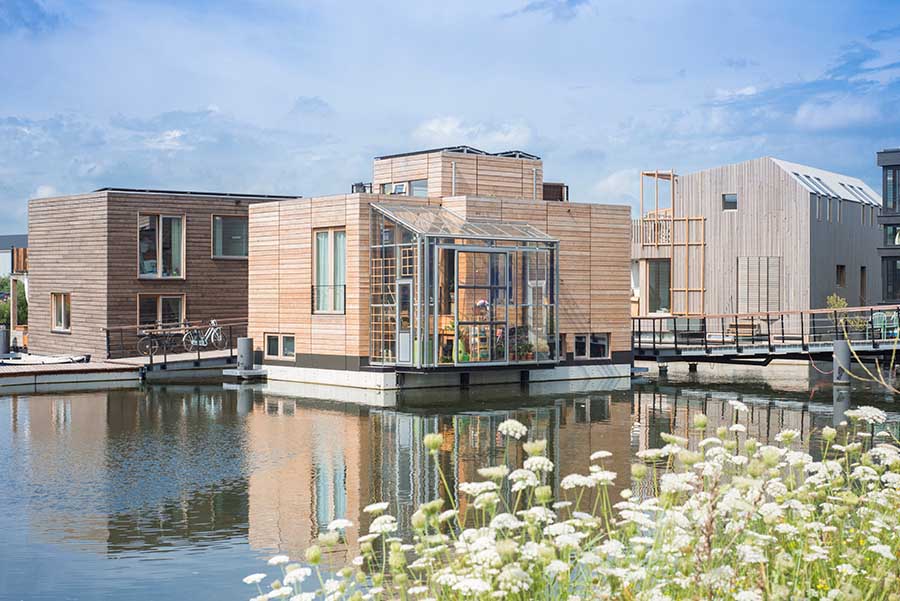 When you think of houses in Amsterdam you will probably think of the slim, high and steep canal houses. And you are right! There are a lot of these in the city. But there are other types of houses as well, such as houseboats, the typical Dutch terraced houses and even new constructions like floating houses. Are you looking to buy or rent a house in Amsterdam? Then get inspired by the different options that are available.

Expats Amsterdam specializes in expat mortgages. If you have any questions about the possibilities or wish to know how much profit you can make, please contact us.

The canal houses in Amsterdam have a very rich history. Most of them were built between 1580 until the end of the 17th century. During that period the city changed from a small port town of 30,000 inhabitants to a global city of 160,000 inhabitants. This growth happened during the Dutch Golden Age of Amsterdam.

The canal houses have different types of architectures. You can distinguish merchant houses and townhouses or mansions. Merchant houses were used for both storing goods and housing. On many merchant houses you can still see the hoist beam at the top of the gable above a small window.

Another thing you might notice is that the houses are crooked. One of the reasons why this is happening is because the houses in Amsterdam are built on piles because of the wet soil. Back in the days these piles were made of wood (nowadays of cement and are put deeper into the ground). The quality of the woods is deteriorating. Which is causing the houses to lean forward of to the side. Unfortunately, there is no easy way to check the condition of the foundation of a canal house. You need to break open the floor start digging for the piles. When you fall in love with one of the canal houses in Amsterdam that you want to buy, don’t forget to check with the Amsterdam council if such an investigation has already been done.

You will notice that a lot of canal houses are leaning forward. One of the reasons to do this is because it makes your house a little bigger without taking too much street space. Making your upper floor bigger than the lower floor is called jettying. This also makes it easier to hoist up goods. Many canal houses were used as warehouses. A leaning façade meant it was less likely that the goods would hit the wall or break windows. If you were able to afford a canal house back in the Dutch Golden Age, you wanted to show your beautiful house. When your house is leaning forward it makes it easier for people to see the decorations and the gable at the top.

Why choose a canal house in Amsterdam?

When you want to buy or rent a house in Amsterdam and you are looking for authenticity. Then you will fall in love with the canal houses. From the outside they have beautiful details and on the inside, they are often renovated to a modern style, with old details. You might think that a whole canal house is a bit big. But there are many canal houses that are divided in several apartments.

A nice fact is that in the back of the canal houses there are gardens. You can’t see these from the street. These are very spacious and have garden houses. When you don’t have the budget to rent of buy a canal house, you can at least view the gardens. Once a year these gardens are open to the public during the Amsterdam Garden Days.

When you walk alongside the canals in Amsterdam you do not only see the beautiful canal houses, but also a variety of houseboats. There are two types: modern arks and cargo ships transformed into a houseboat. The modern arks as shown in the picture are built on a floating pontoon made of concrete. The cargo ships were used to transport goods. When the captain of the boat retired, he would moor the ship and continued to live on it.

After the second world war there was a major housing shortage in Amsterdam. That is when the old vessels came into the picture of the city council and the houseboats became an integral part of the cityscape. Nowadays there are 2,400 houseboats in the city, of which 750 are moored in the city centre.

Why choose a houseboat in Amsterdam?

Living on a houseboat gives an extra dimension to your experience of living in Amsterdam. Throughout the year there are several events that take place in the canals. For example Kings Day on the 27th of April, Gay Pride in August every year, Amsterdam Light Festival in the winter and more. And when you are a nature person but you also want to live in the city, then a houseboat is a good option as well. You will see the geese and swans swim by and can hear the rippling of the water when waking up. Ultimate relaxation!

In the IJburg neighbourhood you will find a lot of new construction. The construction of this area started in 1997 and the first residents moved here in 2002. What makes IJburg special is that is built on six artificial islands and four more will be created.

When you drive, walk or cycle through IJburg you will see a lot of different house styles. There are areas with self-construction houses, where you can individually design and build your own home. This gives each street a different look and feel. And as you already read above, in Amsterdam they are very fond of houses build on water. On the Steigereiland (Jetty Island) they have created a neighbourhood with 75 individual floating houses.

Why choose new construction in Amsterdam?

If you are looking for comfort and environmental friendly house, then new construction is a good option for you. They are built according to the newest environment standards. And as they are commissioned they come with a new kitchen, bathrooms and more!

Buying or renting a house in Amsterdam as an expat can be a difficult task when you are doing it all by yourself. That is why it is smart to get in touch with a realtor. A realtor knows which houses are going to be built and become available on the market.

The definition of a terraced house in the Netherlands is that it is built as part of a continuous row and most of the time in a uniform style. These houses often have a (small) front and back yard with a small shed where you can park your bike.

We mentioned above that self-construction houses are popping up in Amsterdam. Some of them are also terraced houses as they are attached to each other, they just don’t have the same style.

Why choose a terraced house in Amsterdam?

Do you want to become part of the Dutch community and experience the way they live their daily life? Then a terraced house is the option for you! In the neighbourhood of terraced houses there are often street event organised by the people living in the street. In the summer when the weather is good people often go outside to enjoy the sun in their front yard. And they are always in for a little chat.

Especially when you have children the terraced houses are a good option. Schools are nearby and lots of children to play with! Another benefit is that they are often cheaper than the above mentioned houses in Amsterdam.

These four examples of houses in Amsterdam are not the only types you will find. There are many more options you can choose from. We can help you with buying or renting a home in our great city. Please contact us if you want more information on your options.

Scroll Up
We use cookies to ensure that we give you the best experience on our website. If you continue to use this site we will assume that you are happy with it.Ok